all the resources you need to Be A Better Basketball Coach

find success: on and off the court

If being a successful basketball coach were as easy as showing up to practice in the afternoons and roaming the sidelines on game days everyone would be doing it.

The reality is being a basketball coach takes more than just an hour or two for practices a couple times a week and substituting players in and out of games.

To be a good basketball coach it's much harder than the average fan thinks.

There's much more to becoming a successful coach than substituting players and rolling a ball out for practice, as both you and I know.

The thing most coaches underestimate is the time it takes to have a full-time job, a family, friends you like to do things with, and on top of all this coaching. Even those of you who are teachers (who work way more than the regular school day) run out of time to get everything done the way it should be done.

Balancing each of these areas in life can be a struggle. The days of catching a game for fun and playing pick-up ball are behind you. If you're a serious basketball coach you're willing to give up a few things to find success.

This is the first step. The second step is coming up with a plan to coach, build and succeed with your team and program.

You no longer can say, "if it were my team", you now have to figure out what your team and program need to compete and win, and you have to do it in a hurry.

The time is now!

Almost every coach works a full-time job and roams the sidelines in their time off of work. Since you don't have all the time in the world to focus on coaching, you need to use the time you have wisely so you can lead your team and program to success.

The big question then becomes, what do I need to do to give my team the best chance at success?

Once you ask this question you'll start to ask questions about camps, open gyms, workouts, weight lifting, player development, parent meetings, banquets, transportation, and the list could go on and on.

If you're a serious basketball coach the areas listed are a must to create something special for your team and program.

Part of the answer to all of these questions is searching for people who can assist you in practice or help organize camps. There isn't enough time in a day to do everything yourself. You're the leader though, you still have to set the direction for where things will go.

The other part is making sure you're using your time as efficiently as possible. Do you really have time to create forms, come up new ideas, learn about offenses and defenses, and randomly search for new drills?

When I first became a head coach I didn't have the time to do all of these things. I searched the internet feverishly trying to find someone who could help me along the way. Guess what? I found bits and pieces, but I never found anything or anyone to mentor me along the way.

I want to be completely transparent here, there were coaches who I spoke with and learned from. Many times they would give me stories or X's and O's that had worked for them, but these snippets were only a small piece to a much larger puzzle. I was looking for someone to give me the corner pieces or maybe the whole border of the puzzle. I had a family, a full-time job, a life, and I was taking masters degree courses on the side. I didn't have time. Ugh!!

My passion was coaching basketball and I wasn't going to let my team down. This led to a lot of late nights and unfortunately, opportunities missed with my family.

This is what led me to create the Coaching Lab.

The Coaching Lab is a one stop resource for everything a basketball coach needs to lead their team and program. If you're only coaching youth basketball don't worry, there is an area built just for you.

Let's face it, no matter what level you coach you only have 24 hours in a day and 7 days in a week.

If you're coaching a lower level team and you want drills, plays, offenses, defenses, press breaks, stat sheets, roster templates, or open gym guidelines you'll find all of this and more inside the Coaching Lab.

If you're the varsity basketball coach and the head of the program you may need everything mentioned above along with things such as kids camp formats, youth league templates, beginning of season parent meeting examples, team building activities and more.

Inside the Coaching Lab you'll have access to content in the form of video courses, pdf's editable documents, spreadsheets in the following areas: 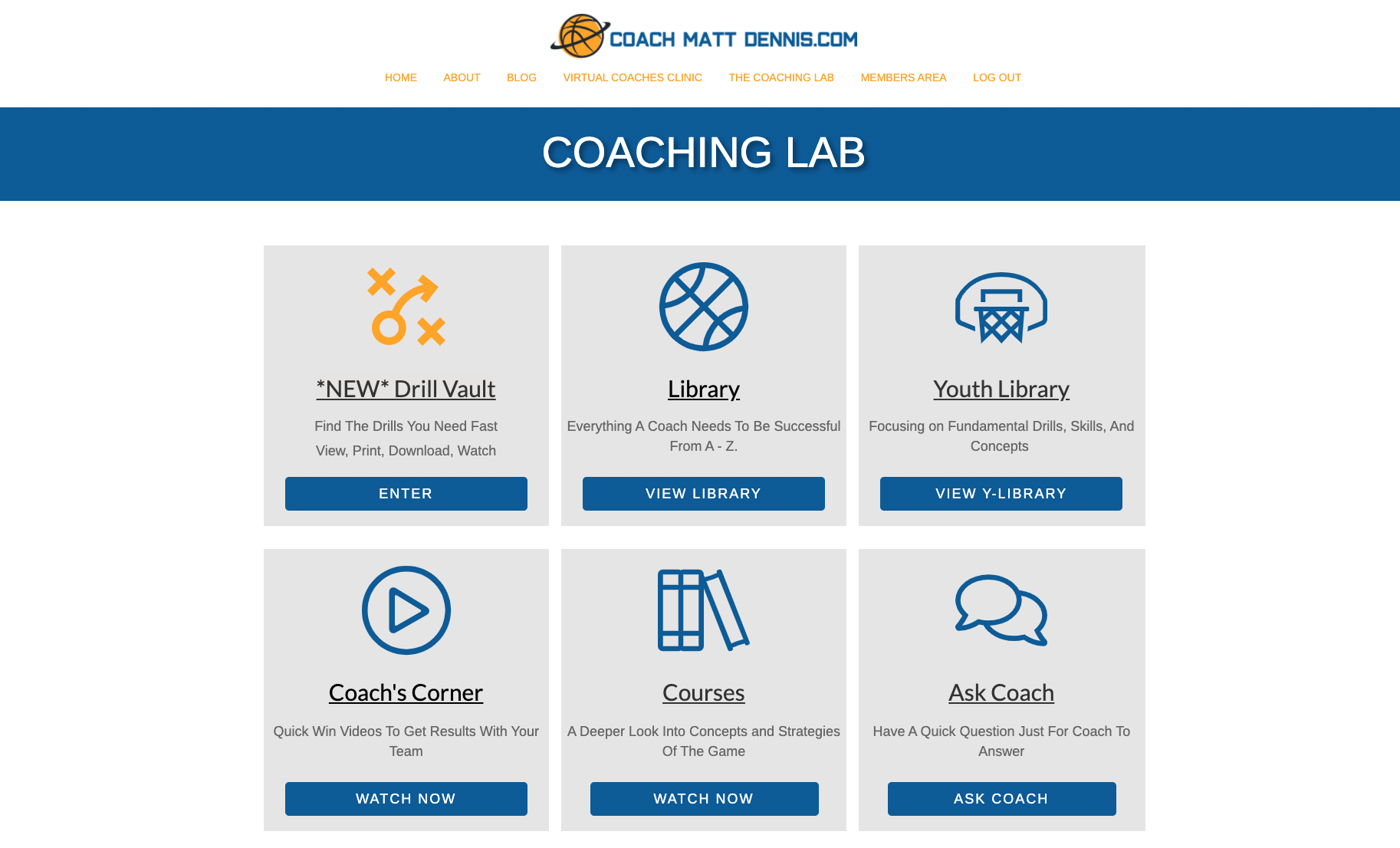 Here's a look inside the Offensive Systems section of the Coaching Library. After you see how many resources are in this one area, you'll get the idea of just how great of a resource the entire Coaching Lab is to a coach.

If you're still not sure about the Coaching Lab take a look at what just a few of coaches are saying.

What Coaches Are Saying

"I will say your resource library has been a life-saver for me for sure.  I'm entering my first year as the Varsity Girls Coach after previously serving as a Varsity Boys Assistant and Middle School Boys Basketball Coach.  Sliding over that one seat comes with a lot of responsibilities and tasks.  I appreciate your collection of resources for sure."

“I want to thank you for all the time and effort you dedicated to our youth basketball program. I have heard many positive comments from parents."

Your site has been more beneficial than any other resource I have come across in my coaching career.

“Where do I begin? I learned a tremendous amount and have enormous respect for how you run a program. I appreciate your commitment to teaching the game of basketball." You are fully protected by our 100% Satisfaction-Guarantee. If for some reason you don't find a resource inside the membership that will help you and your team, you can ask for a refund in the first 30 days. It's quick and easy.