For many coaches, the first couple of days of practice is about selecting the team through basketball tryouts. This can be a stressful time for both the players and the coaches.

Whether you're a veteran coach or if this is your first time, it is hard to tell a player that they didn't make the team and they've been cut. Reactions can vary from tear-filled eyes to players asking for another chance and everything in between.

Knowing this decision isn't always easy to come to and breaking the news is even harder let's take a look at some ideas to help make the decision a bit simpler and meaningful for everyone involved.

Quick Navigation
Start With The End In Mind
To Post A List Or Not?
Keeping Tryout Evaluation Notes
Develop a Plan
Know Your Numbers
Practice Planning
4 Key Areas of Basketball Tryouts
Tryout Drills

Start With The End In Mind

It's important to start your basketball tryouts with the end in mind. Every level has a different goal for why they should keep a certain number of players. At the youth and middle school levels, you want a lot of participation so having larger numbers on a team makes sense. At the junior varsity and varsity level success is more of a focus point so having fewer players to focus on and work with is more acceptable and appropriate.

And while it is good to start with the end, or the final team, in mind you'll also want to focus on the end of tryouts as well. How you handle cuts and communicate information is important to how people view your program, but its also important to the growth and development of the young people who make the team and who are cut from the team.

Let's take a little closer look at how to finish up your basketball tryouts.

Let's start with the elephant in the room. Should you post a list or meet with each player individually? In general, I believe every player deserves the right to sit down with the coach and hear if they made the team or not. If the player didn't make the team they should be given an honest reason why they didn't make the team and what areas they need to work on to have a chance to make the team next year.

On two different occasions, I've cut players who have come back the next year and made the team. While being cut is never fun it can light a fire in certain people to work hard and improve. This is one of the reasons I think meeting with players is a positive thing. If a list is posted and the player doesn't have a chance to listen to the reason they didn't make the team or ask the coach a question the player may never develop an eagerness to improve and try out again next year.

So what did I mean when I wrote  "in general" players deserve to meet with the coach? There are times when a list is appropriate. Some schools have 40 or 50 players tryout. Time may not allow for a coach to meet with every player. The first round of cuts may need to be done by posting a list. The second and final round of cuts are more easily done with a meeting from a time standpoint.

It's important to keep notes during your basketball tryouts. Having player evaluation notes can help with everything from learning player's names to remembering areas they performed well in or didn't do so well in throughout the tryout period.

Two forms I've used and are available to members of the Coaching Lab are an individual Player Tryout Evaluation and a Multi-Player Evaluation Form. Another reason, and possibly the most important reason, to keep tryout evaluation notes is to be able to back-up to parents why you didn't keep their son or daughter. If all you have is your memory it can be hard to answer their questions. If you have a player's evaluation form to refer to it will be much easier to give the parent the reasons why their child didn't make the team and what they need to work on for next year.

The more prepared you are when you walk in the gym the smoother your basketball tryouts will go and the less stressed you'll be. during the tryout process.

The first thing you want to be sure to do your homework and know your numbers.

Each of these numbers will help you layout a practice plan that will allow you to evaluate players in the best way possible.

Next, you want to think about what it is you're looking for in a player and then how you'll evaluate for what you need in a player. Every level will be evaluating players just a bit differently. It will even vary from team to team at the same level. You need to decide what it is you need in your system for your style of play.

On one occasion, I was asked to evaluate tryouts for a semi-professional team. Players ranged from former Division 1 standouts to phenomenal Division 3 players. It was easy to see that each player was talented, but the talent was too broad of a concept. The team was looking for players to fit a certain athletic and skill level for the style of play they were going to play. They also had some specifics depending on the position the player was being evaluated for. Knowing what the team was looking for made my job much easier because I knew exactly what to look for in drills and games.

Practice plans are a coaches best friend. They help you stay on schedule and keep you on track when implementing different phases of the game. So whether you write things down on a napkin or use a beautiful template for your practice plan be sure to create a plan before you walk in the gym. The four key areas during basketball tryouts that coaches look for are skills, athleticism, action, and details. Each area is important by itself but their importance is magnified when these areas are put together to make-up a complete player.

A player's skill level is going to be the first thing most coaches look at during tryouts. They'll be evaluating players on their ability to dribble, shoot, pass, and play defense. If a player is lacking in any one of these key areas they likely to go the bottom of the list fairly quickly.

As players get older the addition of skills such as helpside defense, closing gaps, closing out on the shooter, communication, and rebounding amongst other skills are added as part of the skill evaluation.

Successful basketball teams are built on athleticism. And while the most athletic team does not always win, teams who are not very athletic tend to struggle when it comes to winning consistently. For this reason, athleticism becomes a big factor when evaluating players in tryouts.

A player's ability to run fast and jump high isn't the only aspect though. More importantly, is how the player uses their athleticism and skills together. If a player is lightning quick but has no control of the ball when they dribble then the athleticism won't be enough to make your team competitive every time they step on the floor.

When I say action I am referring to game action. Can a player take their skillset and athleticism from a structured drill and apply it in a game set in real-time? This may be through small-sided games - 3v3, 4v4, or 5v5 play. It isn't enough to have a point guard who can dribble two balls up and down the floor and then have them turn the ball over constantly when defensive pressure is applied in a game. Players need to be able to transfer the skills they've learned and used those skills successfully in game situations. the only way to see this is to evaluate your players in game-like situations throughout tryouts.

The final area to look at is how a player pays attention to the details. There are two different types of details to look for during basketball tryouts.

As mentioned above, when these four areas - skills, athleticism, action, and details - come together you have a a clear picture of who will make your team better on and off the court. When you find a player who possess a high level of each area you know you have a special person and player.

The question that almost all coaches come to is, how do we assess all of this in our practices? The answer is through the drills you choose and the progression you use as you go through each drill.

Depending on the level you coach you'll find the progression from one skill to the next will be slower or faster because of the skills and concepts your players bring with them on day 1 of basketball tryouts. It's important to note that this drill evaluates more than one area at a time.

Progressions 1, 2, and 3 are all used as well. Progression 4 would be best evaluated if there were no cones and it was a 1 v 1 live situation or within a scrimmage where a lay-up opportunity presented itself in the flow of the game. Depending on the type of half-court defense your team will play will dictate what drills you do during basketball tryouts. Below you can see an example of how your half-court defense will progress from 3 v 3 play all the way to 5 v 5 play. Check out Building A Force Baseline Pressure Defense to get all the concepts and drills needed for basketball tryouts and practices all year.

Defensive Areas To Focus On During Basketball Tryouts

The final drill you should have in your arsenal isn't really a drill at all, it's allowing your players to run up and down the floor and play 5 v 5.

There is no better way to know who is picking up on your concepts and who really has a feel for the game then play on 5 v 5. This isn't to say that having players run through drills and play small-sided games isn't important, because it is. But they do not substitute for live-action that is unscripted. Using the outline presented above you'll know exactly who to keep and to cut after two or three days of basketball tryouts. For many coaches the evaluation part of practice isn't the hardest part, it's sitting down and having a conversation with a player who truly loves the game but doesn't have what it takes to make the team. Remember to be kind, honest, and encouraging as you sit with each player. Not only are you helping grow the players who make the team, but you're also helping those who don't make the team grow as well. 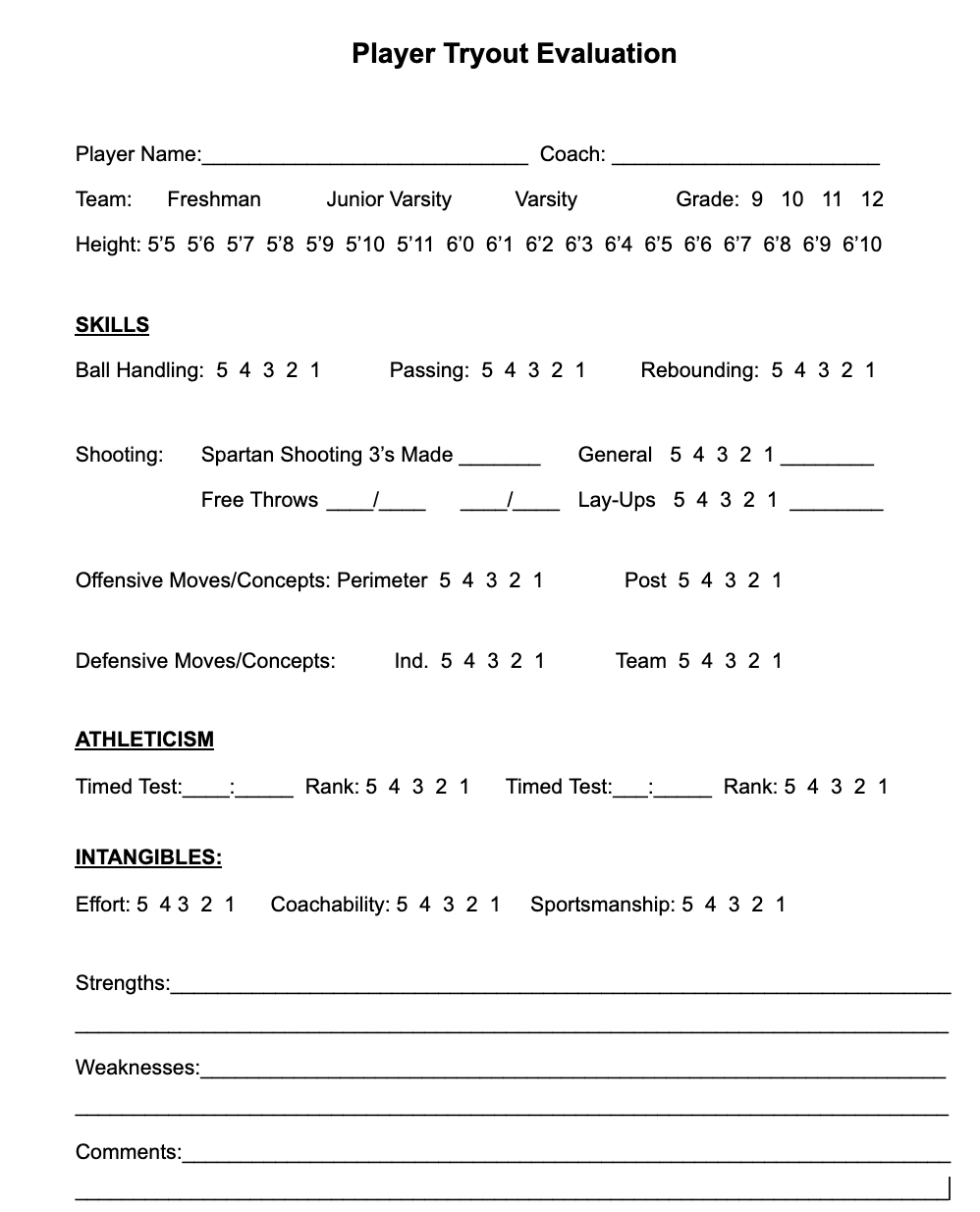 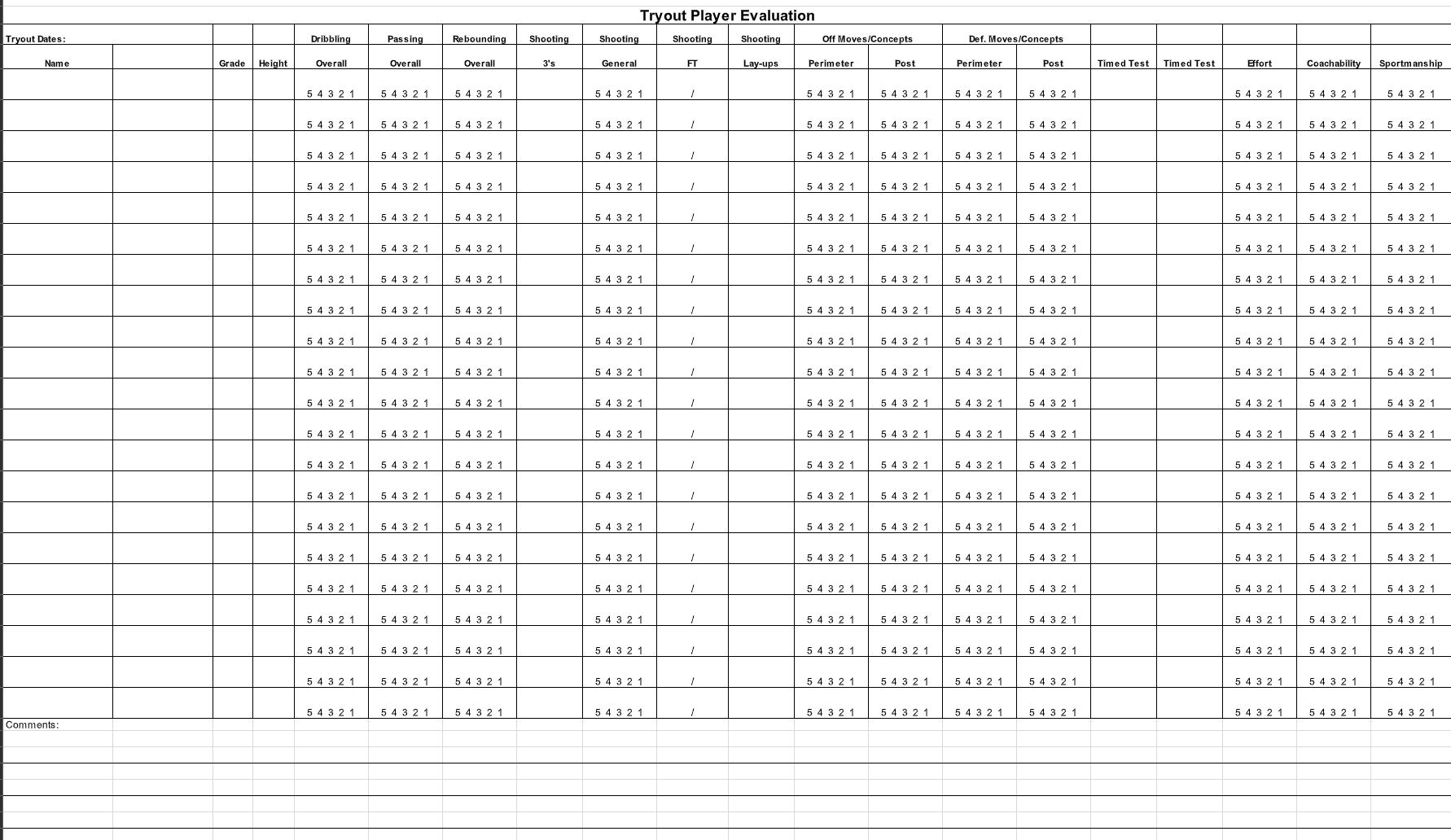 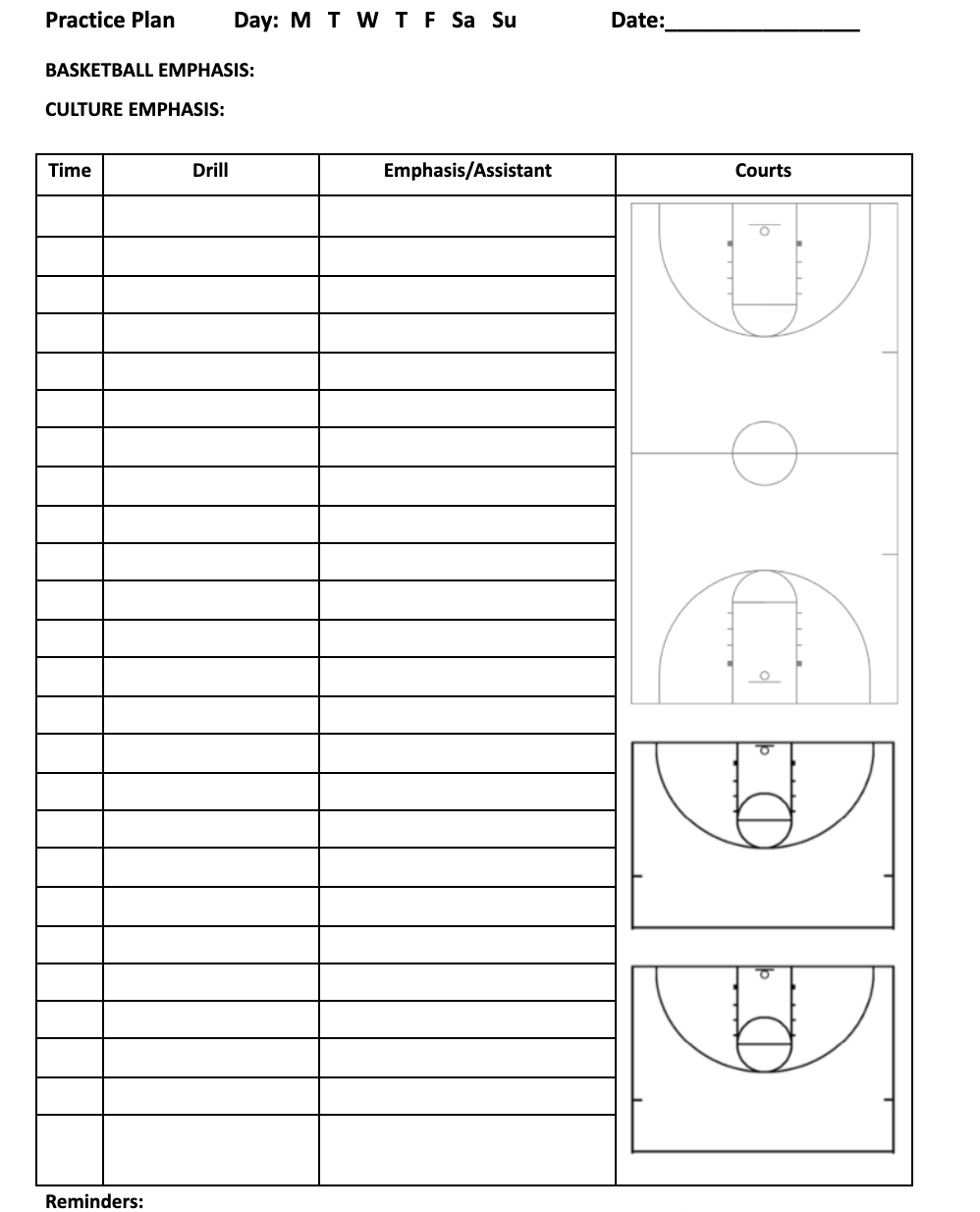 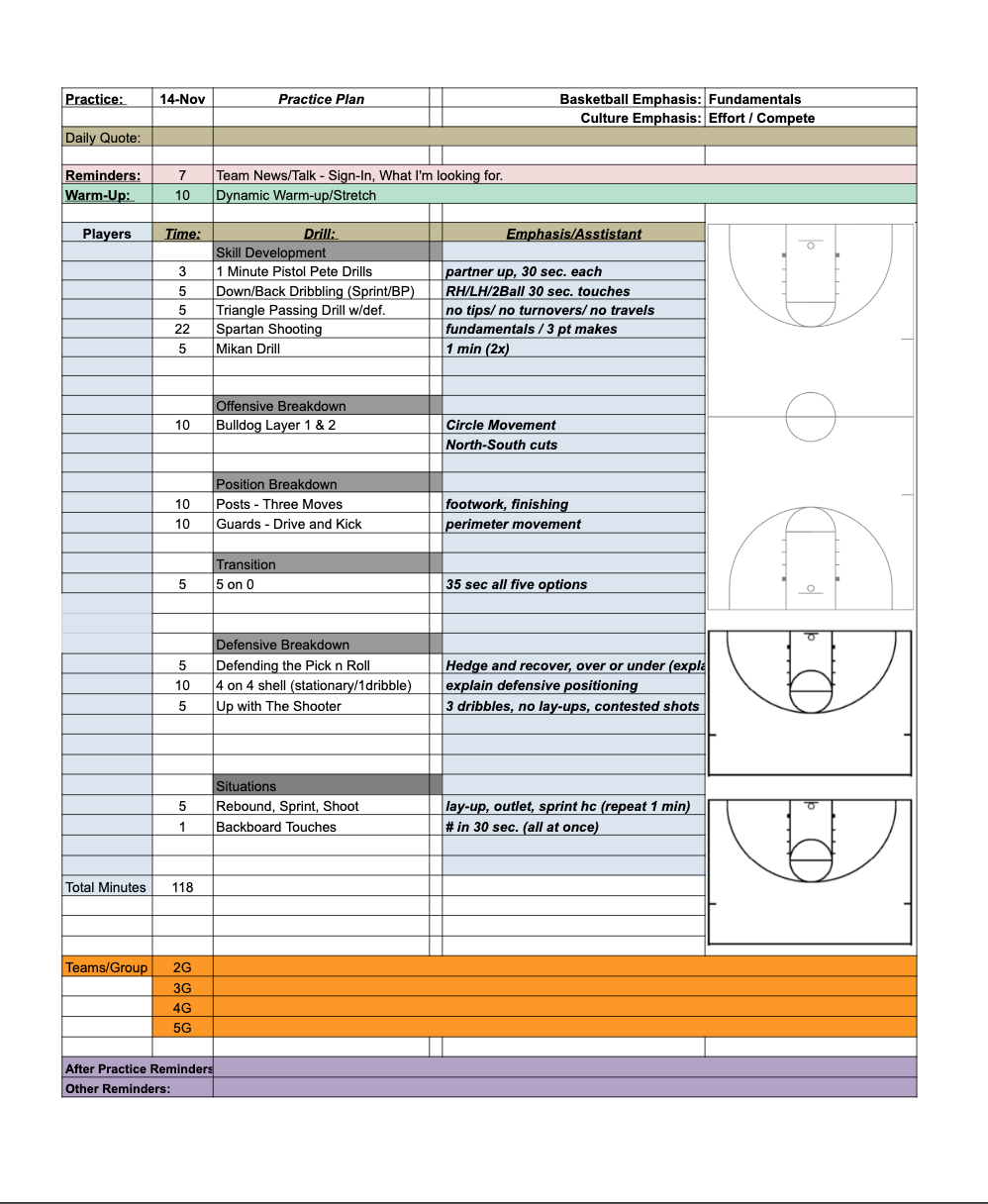