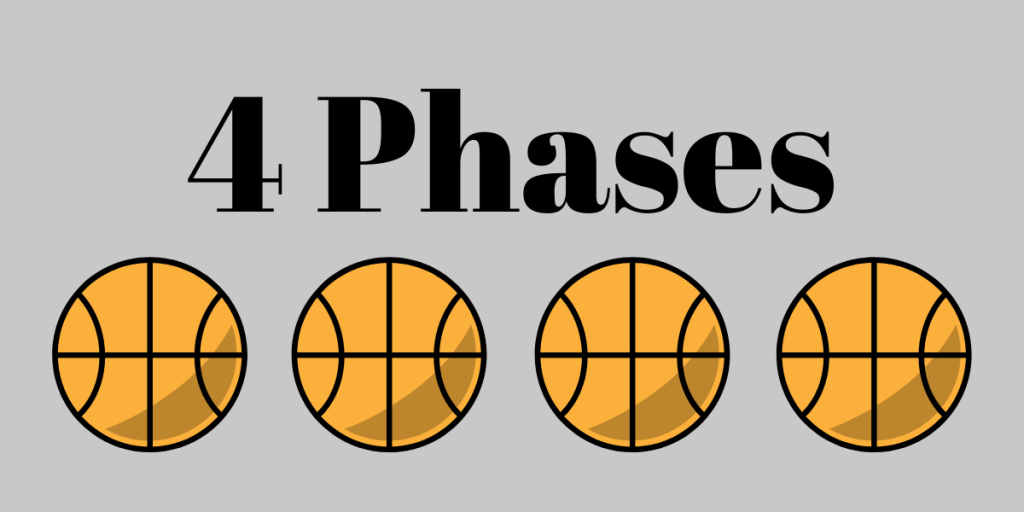 Heading into a new season you can give your team an advantage over your opponents. You can prepare them in the four key phases of the game to be ready to compete with teams that may look better than you on paper. I think many coaches only focus on two of the four phases of the game and this is where you'll be able to steal the momentum and come up with big plays in important games.

As we dive into each phase you need to ask yourself two crucial questions:

1. What is my philosophy and system for this phase of the game?

2. What is the philosophy or system of my opponent?

Half-court offense is the most thought about phase of the game by coaches and players. On social media I get the most likes and shares on posts that deal with a play or action in the half court offense. Posts on other areas, no matter how important, never get the same attention.

Whether you played basketball in college, came up under a great head coach, or are developing a system of your own, there are some key questions to ask yourself when dealing with the half-court offense phase of the game.

What kind of players do I have?

What style of play am I comfortable coaching?

What will allow us to compete with the best teams on our schedule?

The answers you come up with will have a lot to do with the type of players you have and the coaching style you subscribe to. Don't be afraid to think outside the box as there are many options that may fit what you and your team are need.

By no means is this an exhaustive list, it just goes to show there are several options for you to consider when selecting an offense. As a way to help coaches discover which offense they may want to use I provide an Offensive Systems inside the Coaching Library of the Coaching Lab.

The second phase to look at is what happens after your half-court offensive possession is over.

The line of thought that players only need to get back and protect the hoop is the most popular transition defensive tactic, and may be the only tactic used by some teams. This is obviously a key component of getting back and playing defense in the half-court, but it's not the only way to utilize transitioning from offense to defense.

Ideas on Transitioning From Offense To Defense

A big question you need to ask yourself is, "What do I want my defensive transition to do?"

This begs the question, when do you want to apply pressure on the ball and pick up the other teams players?

The philosophy and system you decide to use does not have to be fancy, it only needs to be enough to stop (or at least slow down) the transition offense of the other team.

I've heard many coaches yell at a player to pick up the ball or ask why they didn't stop the player from driving to the basket. I truly believe that most of these players were not coached to do what the coach is asking of them. There is a communication breakdown between the player and the coach in what each thinks the players responsibility is in transition defense..

If the opposing team gets the ball down the floor and has to set-up a half court offense you then need to have a solid plan for phase three, half-court defense.

Like half-court offense there are a lot of coaches who hang their hat on their team's ability to play solid half-court defense. It doesn't matter if it's a zone or man-to-man, half-court defense is important and gets a lot of attention. Similar to half-court offense, I think a coach needs to look at their team and determine what types of players they have and what type of defense they can be successful with year in and year out. This may be a mixture of zone and man defenses or adjusting your man-to-man defense from a pressure defense to more of a sagging defense.

Hybrid Defenses - Triangle and 2, Box and 1

There are other defenses your team could utilize as well, along with various tweaks to make them as successful as possible against your opponents. The biggest thing a coach needs to do with their defense is get their team to buy-in to whatever defense they decide to play. When you get your players to play hard it's amazing what they are capable of accomplishing together.

Here are the key area you need to make sure your defense focuses on.

If you're looking for defensive drills and concepts or you want to explore a more in depth study of defensive systems check out what the Coaching Lab has to offer.

Last, but certainly not least, is phase four: transition offense. Much like transition defense a coach needs to decide when and how their transition offense will start. Some coaches only like their point guards to bring the ball up the floor and make decisions. While other coaches like the first available ball handler to streak ahead and try to make a play. There is no right or wrong way to transition into your offense, but having your whole team on the same page is vitally important to your teams success.

We'll spend our time looking at transitioning to offense after an opponent misses a shot in this phase and not on taking the ball out of bounds after a made shot.

On a missed shot a team typically begins looking for a fast break and then moves into a secondary break or early offensive action. If a team does not have and early offense option they may go into a quick hitter to a key player or directly in their half-court offensive set.

Many of these options along with several others can be found inside the Offensive/Defensive Transition section of the Coaching Library.

Other ideas to consider in your transition offense are:

The Importance Of Every Phase

Each phase of the game is important and needs to be given its appropriate time in practice. The moment you ignore one phase you'll come up against an opponent who excels in the opposite area and exploits the miscommunication, lack of organization, or misunderstanding of the five players on the floor.

Making sure you have a basic philosophy and system in all four phases of the game that is communicated to your team. Having a solid understanding of these 4 Key Phases of Basketball is vital to your team competing and finding lasting success throughout a game and season.

The Big 3 In Basketball Tryouts

Previous Post Is Your Zone Offense Holding Your Team Back? Next Post Win More Basketball Games Doing This One Thing

Let me send you my FREE practice checklist and court diagrams right now as a way to say thanks for visiting my website.

By signing up you agree to receive the More Success | Less Time Newsletter and other correspondence from Coach Matt Dennis.