If you want to win more basketball games this season than this is for you.

"Will this drill make my players better? If I add a new (fill in the blank) will that give my team more wins?"

I suspect you go through these types of questions as you prepare your team for a new season or possibly when you need to pivot and add something new mid-season. And I'm going to guess these questions lead to tough decisions.

It can be a tough decision to add something new to your team. You watch videos, search the internet, and think through the pros and cons of the decision before you make the final call. You need to make sure this decision will lead to more wins.

Well you're in luck, I am going to give you the #1 game changer I use to win more basketball games. I'm not an NCAA champion or an NBA champion. I'm just a high school coach, just like you.

In today's social media age, we hear stories about the best defense and greatest offense ever more than we'd like. Most of the time these "best ever" concepts aren't new. They are from the latest Division 1 NCAA National Championship team or the NBA Champions and have been done many times before. The fact thatt someone one a championship makes these concepts easy to promote and sell as the best thing for your team right now.

My problem with the latest and greatest from D1 an dNBA teams don't fit high school basketball very well. Let's face it, there are very few high school coaches have a dominate D1 player or future NBA player on their roster. (I won't go down this rabbit hole any further.) You, me, and 99.9% of every other high school basketball coach out there doesn't need the latest and greatest. We need time tested and proven concepts and drills that work for the players we have.

For this reason I offer you the #1 way to win more games that isn't a gimmick.

Quick Navigation
How To Get Your Players To Play Hard
1. Prove Them Wrong
2. Get Them To Believe
3. Make It A Habit
4. Give Praise When Praise Is Due
Bottom Line: Comfortable Doesn't Win

The #1 way to win more games this year is having your players play harder.

I know it's not as sexy as a great lob play, a new offensive concept that you saw on Twitter, or how you should be rotating on defense to cover the ball screen. And I know it sounds really simple to do, but that's where coaches get it wrong, it isn't easy to do.

What about getting on them in practice and yelling at them. I suppose that will put a little pep in their step while you're paying attention. As soon as you turn around the players will slow down and likely have a comment or two about you to tell the first teammate they get around.

Getting players to play hard is hard because you have to get the players to believe that playing hard is essential to more success and your players have to know what playing hard really is, what it feels like to push themselves and each other.

Playing hard isn't just beating the clock, although time does add value and pressure to many drills. Truly playing hard is as much a mental action as it is a physical action and ultimately becomes a response from the heart when you do it for the team.

Once you get your players to put their head, body, and heart into playing hard you'll be amazed at what is possible.

How To Get Your Players To Play Hard

There are three things I believe you need to do :

Every player believes they already play hard. They aren't lying to you when they say they're playing hard. But let's face it, the perception of playing hard isn't accurate. More likely they have never been pushed and they think if they are sweating they are playing hard.

One way prove them wrong is to ask them how many left-handed full-court layups they can make in two minutes. A typical answer is something like 50-60. Have them prove it to you. Put two minutes on the clock and get a group on each end ready to dribble full court and see how many layups they make.

The team typically makes it and thinks they are pretty good. Now put two more minutes on the clock and add 4-6 more layups to their goal. If they made 60 they now need to make 66. Tell them that they need to push the ball out farther, they need to jump out instead of up on their layups and they need to encourage each other on a make or miss.

Whenever I've done this my players almost always make the goal and then at the next practice we do the drill again and I add 2-4 more layups to the total goal. As the total number goes up I explain to them that they thought they were working hard and doing enough the first time we did the drill, but they were wrong. We could do more and accomplish more if we paid attention to a few details, we focused on going harder, and we encouraged each other.

The drill I just walked you through is called 72 Layups In 2 Minutes. I've had teams make more than 72, this is dependent on the number of players you have though. 72 makes is a good number for a team of 12 players at the varsity level. 2. Get Them To Believe

In a small way, I have them hooked with the 72 Layups In Two Minutes drill. This is just the tip of the iceberg though and really 72 layups aren't too hard. We need to make things more difficult and push them harder.

A great drill to use for this is 4v3 defensive shell. This is a drill I use quite often as a part of our half-court pressure defense. Once your players know their defensive responsibilities put them in a position to be at a disadvantage. This requires them to have to communicate and rely on each to be successful.

Once your team is moving and communicating effectively give them a chance to tell you how hard it is to keep the other team from scoring with three defenders. Now add the fourth defender and explain to your players that the effort doesn't change with a fourth player. What changes is the effectiveness of the defense with a fourth player working just as hard with the same goal in mind. Allow the offense to score at any time and give them a two dribble limit each time a new player touches the ball. Make the defense get three stops to get out of the drill.

Players will need to communicate and give maximum effort to string together a few stops. All it takes is one person not working hard or not communicating and the defense is shot. (If you want to add another level of difficulty have the defense jog a down and back each time they get scored on.)

Habits are hard to change. This is why you need to create a habit of hardwork in your players. Once the habit is created it will carry over day after day and game after game and great things will happen.

One way to create a habit of hard work is to add elements of movement and difficulty to what once was a mundane or simple drill.

I've already shown you the 72 Layups in 2 Minutes Drill but I want to give you one more drill that can be added at any level makes your players work. We call it Full-Court Layups With Transition but ultimately its a full court partner layup drill. Don't let the word warm-up fool you. This lay-up drill makes your players work and since the whole team is going at the same time there is an element of urgency because you don't want to slow the whole team down.

The unique part of this partner layup drill is the rebounder and shooter start together.

Here is how it works:

We do six types of layups. You can add as many layup variations as you'd like or as few. By doing six types of layups we get twelve trips down the floor. This is not your typical layup line, its hard work and that's the habit we want to create.

When it comes to shooting every coach has their favorite shooting drill. Many of them have players standing and shooting and fatigue doesn't become a factor. This isn't true to how the game is played though. Fatigue is a factor and late in the game, it is a big factor.

Here is one way we help our shooters learn to shoot as they get fatigued. In Six Ball Shooting the players run full court and receiving a pass from the baseline. (I like to have players shoot 15-foot shots first and then 3 pointers but you could do it however you'd like.) As soon as a player passes the ball they sprint down the court and get a pass from one of the players standing at the other end of the court with a ball.

Add 3-4 minutes to the clock and give the players a score to beat to make the drill competitive. Your players will be getting fatigued, getting lots of shots, and working hard to meet the goal you've set. Each time you can add just a little more and ask them to run a little harder, pay a little more attention to the details in their shot and encourage each other and watch the number of makes increases.

If you like drills like this you can find more by downloading 13 Uptempo Drills or taking a look at the Full Court Shooting Drills video I've linked below.

4. Give Praise When Praise Is Due

If you want players to play hard and push each other consistently you need to praise your players. Sure it's easier to bad mouth the slow kid in a sprint and tease the player who's hands don't catch the ball every time, but this isn't coaching, it's being a bully.

Rather than pointing out what you don't want start to point out what you do want. It may be few and far between at the beginning, but your players will pick up on what you praise and you'll start to see more of those hustle plays, high fives, and players sprinting the floor.

The bottom line is the #1 way to win more games is to get your players to play harder. If you don't push them to consistently play harder they will settle for what is comfortable, and let's face it, comfortable doesn't win too many games.

7 Ways To Create Scoring Opportunities Within Any Offense 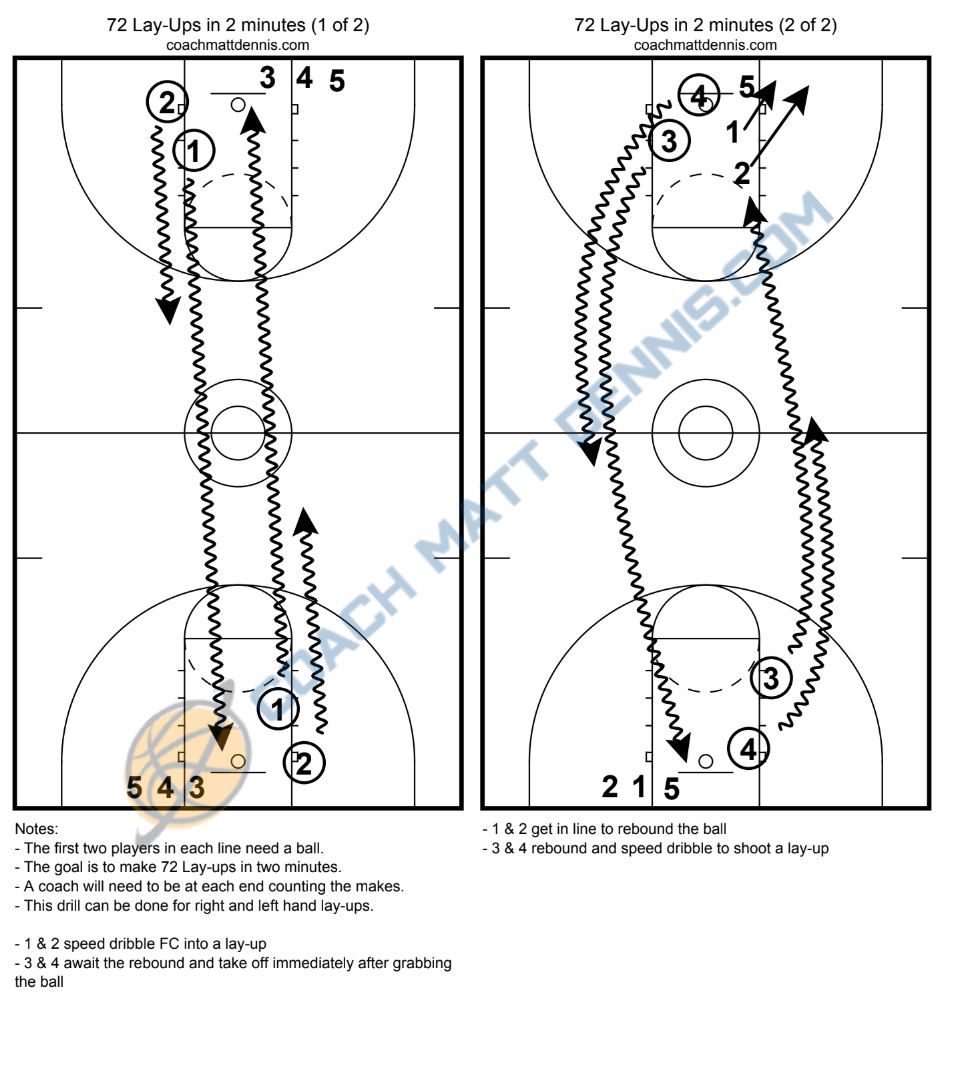 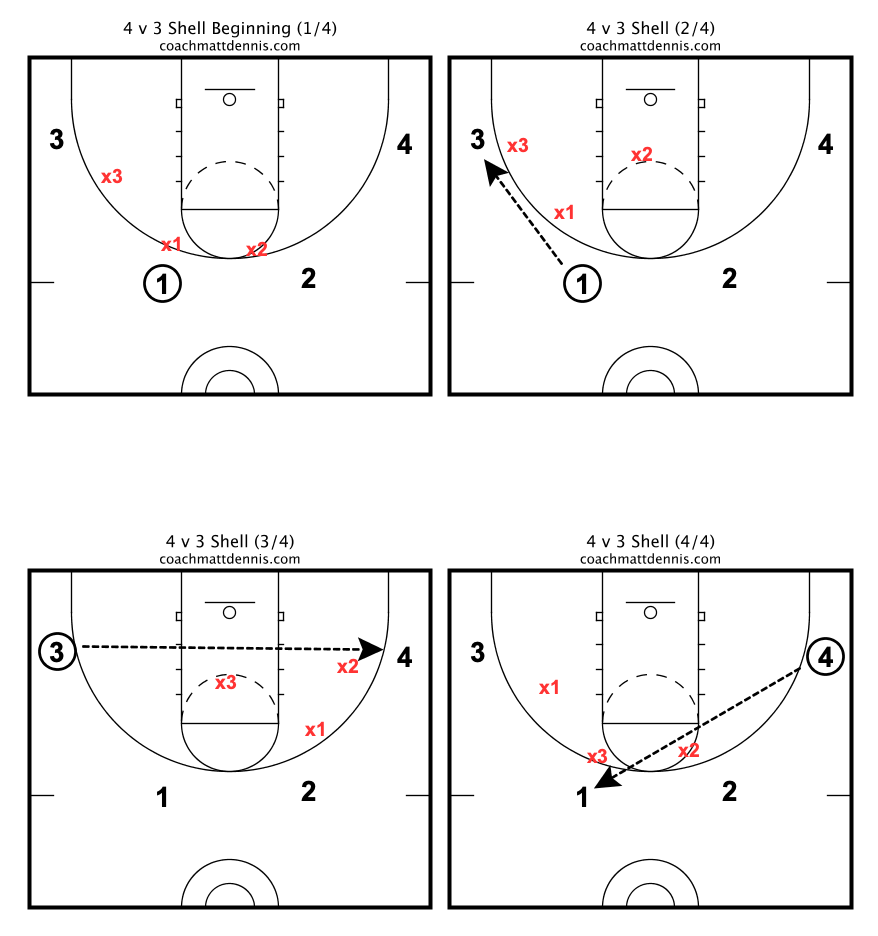 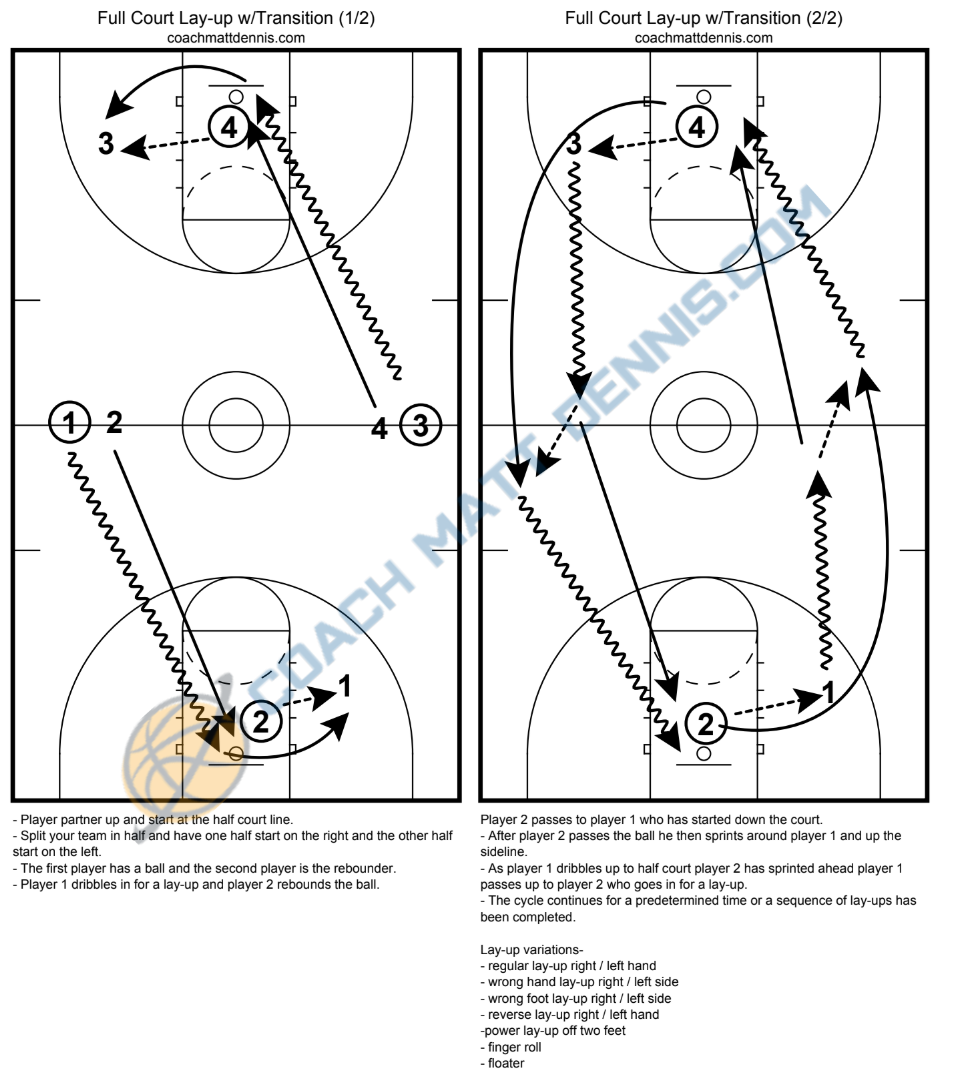