Defense is the number one thing coaches talk about when they sit in the interview, after they first get hired, and when they start a new season. The second most talked about thing is an uptempo pace on offense. We'll save the offensive side of the ball for another time though.

Since defense is such a talked about part of the game why are so many teams not very good in the half court defense? It's not a lack of practice or the idea that defense isn't important. It has more to do with the synergy that goes into the defense.

These three areas will decimate a defense, especially the force baseline pressure defense we're about to cover. If you want to win games consistently you need all three areas at all times working in synergy.

Whether coaches know it or not, they are always asking themselves how to best improve upon or fix these three areas. Have you ever said anything like this to yourself:

If you're tired of saying these things to yourself and not winning as much as you'd like, you'll want to keep reading. I'm going to breakdown a force baseline pressure defense system that players love to play and one that will put your team in the win column on a consistent basis.

The 5 Components Of The Force Baseline Pressure Defense

The first thing you have to do is believe the system I am about to show you will work. I know you haven't even seen it yet and I'm asking for a commitment. The fact is no matter what system you use if you waiver and aren't committed your team won't be any good at the defense.

The Force Baseline Pressure Defense is based on five key components:

Hopefully, you can start to see why a commitment to this style of pressure defense is so important.

One of the first comments I hear from coaches is that they don't think they have the right athletes to play a pressure defense. As long as the players know their role and understand what they are doing the force baseline pressure defense will work.

The level of success you have with the defense has more to do with the commitment, understanding and effort of the players than it does with their athleticism. Now don't get me wrong, superb athletes with the same commitment, understanding and effort will have the upper hand every time, but remember what I said above - many teams aren't very good at half court defense - this is because teams don't have total commitment from top to bottom. 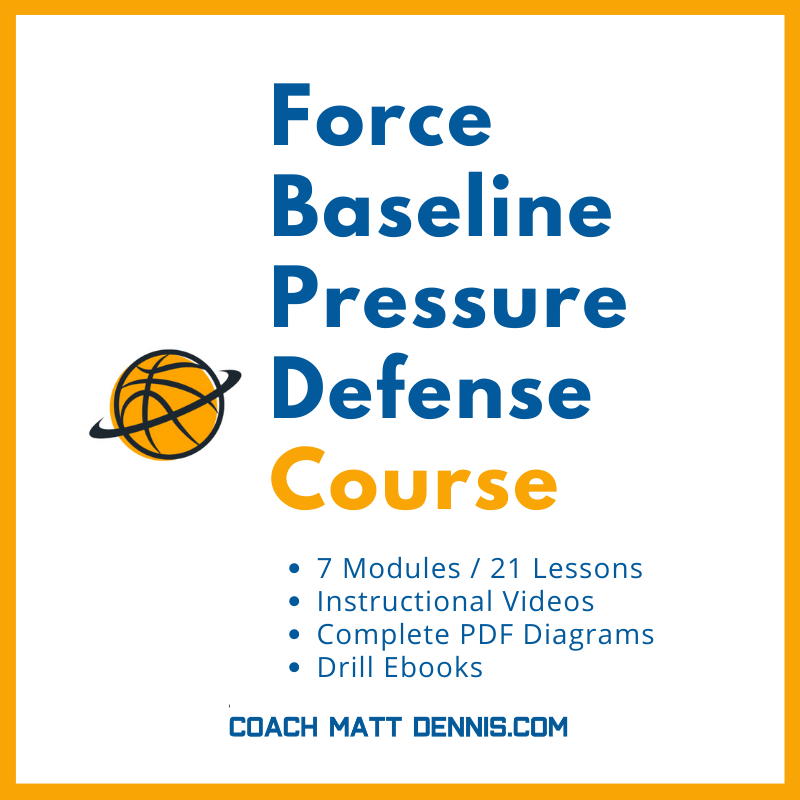 Start Winning More Game With The

Give your players confidence and stop losing games you should be winning. Your teams next championship is waiting!

Breaking Down The Court There are four primary spots on the floor.

want to force the offense towards the baseline.

4. The lane or paint area where we want to keep players out.

Once your players have a good grasp of the four areas they need to know what their responsibility will be in each area. It's important that all of the players know all four areas and the corresponding responsibilities since they will likely guard someone in each area multiple times each game.

Ball Is At The Top Of The Key Player X1 is defending the ball inside the contain area. Any time the ball is between the lane lines and above the free throw line players want to:

Players X2 and X3 are both one pass away so they are off of their player one step and in towards the ball one step. This leaves an easier pass to the wing while allowing both players to close the gap on the drive into the free throw area from the top of the key.

Players X4 and X5 are both two passes away and play two steps off of their player.

Ball Is Outside The Lane Line Once the ball moves outside the lane line the offensive player with the ball is now in the influence area.

Player X2 and X4 are both both one pass away but have very different responsibilities.

Player X2 is on the ball side wing and that is where you want to keep the ball. Player X2 will stay one step towards the middle and one step up towards the ball still. This allows for an easier pass to the wing and makes the court smaller for the offense.

Player X4 is one pass away but is on the other half of the court and wants to deny the reversal pass from player 1 to player 4. Since the ball is so close to the lane line extended player X4 is not completely denying, but as the ball moves towards the wing and the force baseline area player X4 denies much harder to deter a reversal pass.

Player X3 is two passes away and is moving towards the helpside as the ball moves more towards the wing.

Player X5 is in a full deny in the post. Anytime a player is defending the post they should be between their player and the ball no matter if it is a big man or a guard who is defending the post. The reason for this is because there will be help on the backside of the post and this lob pass is extremely difficult for almost all high school players to make.

The helpside 'I' is a great visual for players when they are first learning the defense and it's a great reminder as you reteach the defense throughout the year.

Anytime the ball has chosen a side fo the court there will be players in the helpside. These players should be touching someone on the helpside 'I'. If they are not, then you're not going to put enough pressure on the ball handler to make a tough pass or dribble into trouble. On The Ball Defense

Most players understand how to play at the top of the key. This is how they learned to play defense growing up in youth leagues.

Once the defender is guarding the ball on the wing the defense goes against what they have learned. You need to make sure your players do the following:

Here is an example of how defenders footwork should be when guarding the wing.

In the first clip the defensive player keeps the offense out of the middle of the floor and forces them back to the baseline. The offense takes off outside of the lane to try and get a shot. (Remember this is 1v1 and there is no helpside in the video.)

In the second clip the defense opens up and allows the offensive player to go middle. The offense does crossover and is able to get inside the lane in order to get a shot. This does two things:

Trapping the ball when it is driven from the win to the baseline is one of the main reasons to play this style of defense. Offensive players believe they have an opening and are eager to take the baseline drive only to be met a helpside defender who is ready to trap.

Here is a look at how this happens and is practice in a 3v3 situation. Defender X1 is in the helpside and can easily read the drive from offensive player 2.

Defender X3 drops as the ball drops and is ready to defend player 1 or 3 on the long pass from player 2 who is driving the ball.

Any defender on the floor may be the low person on the court and become the trapper. Defender X3 takes any long pass and player X1 and X2 communicate as to who will cover the open man after the pass.

In the example above X3 has to choose between one of two players to defend if a long pass is made. But how did X3 know they weren't the one who was supposed to trap or make another coverage? It's all about the communication. Your players have to communicate in order for their timing and rotation to be effective. If a player rotates to trap too slow the trap will be split or passed out of easily. If a defender doesn't call out LOW there will be two or three players moving to trap the ball, leaving offensive players and the basket unguarded.

As you piece together each part of the defense it is nice to know what the whole thing will look like when all the moving pieces are in place and working in synchrony. Remember that each player will need to know each rotation so be sure to have all of them practice guarding the top of the key, the wing, and the post.

Here is a look at player rotations from a 3 Out 2 In offensive set where the 2 drives to the baseline and is trapped.

In this next example ball has been entered into the high post 4 and passed out to the weakside wing.

A ball screen is something that many teams will try to do for three reasons against this defense.

Reason 1 - Create a mismatch with a guard and a big.

Reason 2 - To keep the ball in the middle of the floor or to get a reversal.

Reason 3 - To open a driving lane into the free throw lane.

In the diagrams below you see a hard hedge defense by defender X5 when player 5 sets a screen on X1. Defender X1 quickly goes under player 5. This helps to slow the roll man and gets X1 in defensive position right away.

In the second diagram you see X3 and X4 play off of their offensive player to help on the dive or roll from player 5. This allows for X5 and X1 to keep pressure on the ball and not allow player 1 to penetrate into the middle or pass the ball easily to player 5 in the middle of the lane.

Once X1 is in position to guard player 1 who has the ball, X5 can sprint back to his original defensive assignment, player 5. X3 and X4 both rotate back to their positions.

Where To Go From Here

We covered a lot of material and in some ways we have only scratched the surface of knowing how to get your team to understand and execute a force baseline pressure defense. The best way to get them to play this style of defense is to get them on the court learning in real time while performing these specific movements.

The good part is you have what you need to start teaching your players right now.

If you want to dive deeper and really take your teams defense to a new level click here to learn more about my Force Baseline Pressure Defense Course. You'll learn concepts such as how to defend different situations and sets, what drills to use in practice, and uncover the cardinal sins your team can't do if you want to win consistently.

Good luck as you build your defense. If you have any questions feel free to connect with me on social media and I'll be glad to help you out.

7 Ways To Create Scoring Opportunities Within Any Offense